welcomes you to the

We love Disney, yes we do. We love Disney, how about you? From children to adults, Disney fans are everywhere! We recently took our baby girl Em to Disney for her 1st Birthday. While she may not remember the trip, it will always be a memory through pictures. If you haven’t had the opportunity to introduce your little ones to Disney films yet, now is your chance.

Reel Mama and her awesome blogging friends at Jenn’s Blah Blah Blog, Mama’s Mission, My Four Littles, and Everything Mommyhood are delighted to bring you the Ultimate Disney Blu-Ray DVD Package giveaway. The package includes 6 beloved Disney classics coming out on Blu-Ray for the first time, plus the brand new Disney movie Super Buddies also on Blu-Ray! 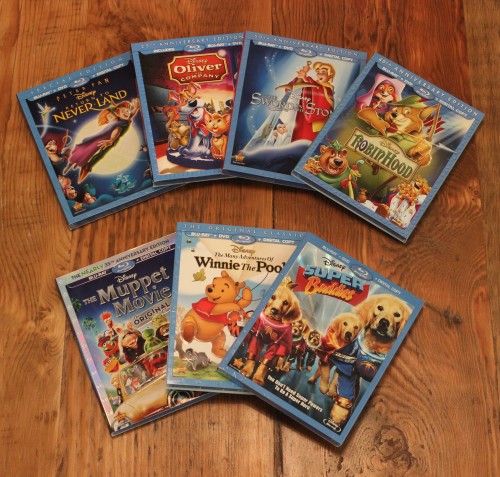 Super Buddies is an adorable live action film your kids are going to love. Packed with awww-some action and adventure, Super Buddies follows five Golden Retriever pups as they become canine crime fighters with super powers after discovering some magic rings from a distant planet. Your kids will be rooting for these doggies to beat the bad guys and save the day. The movie is G-rated and releasing on Blu Ray on August 27. You can get cool Super Buddies activity sheets here. Find out more about the movie here.

The other movies are simply wonderful to have in your movie collection. The heartwarming classic The Sword in the Stone feature Arthurian legend, chivalry, and fun with our favorite storybook legends like Merlin. Robin Hood is a fox in the classic movie celebrating its fiftieth anniversary; in fact, the entire cast is animals in medieval attire. Return to Neverland is the adorable story of Wendy’s daughter: she joins Peter Pan in Never Land as the first Lost Girl. Check out Reel Mama’s interview with Finding Neverland screenwriter Temple Mathews for awesome details about how he updated Peter Pan for a new generation.

The Muppet Movie was the Muppets’ screen début, when Kermit, Miss Piggy, Fozzie and the gang dream of making it big in Hollywood, and Kermit singing the timeless classic Rainbow Connection. The Adventures of Winnie the Pooh follows Pooh, Piglet, Tigger, and Eeyore through their adventures in the Hundred Acre Woods. Oliver and Company is an adorable update of Oliver Twist as the orphan kitty Oliver and his friends seek a forever home in the heart of New York City.

Okay, movie lovers, ready to WIN some awesome Disney flicks? Let’s do it!

What movies are included in the giveaway you ask? All movies will arrive in Blu-Ray format.

One person will be randomly selected to receive the six (6) Disney Blu-Ray movies mentioned above. The Ultimate Disney Blu-Ray DVD Package Giveaway will run from Aug 22nd through Sept 9th. All entrants must be at least 18 years of age or older and residents of the United States or Canada. All entries are optional; however, the more tasks you complete the greater your chances of winning. You must use the Rafflecopter below to enter. Good Luck!

Disclosure: Mama’s Mission was not compensated for this post, did not receive any promotional materials nor are we responsible for the delivery of the prize. Reel Mama participated in an expense-paid trip by Disney to learn about several of the films featured in this giveaway. Reel Mama and participating bloggers are not responsible for the shipment of the Disney giveaway Blu Ray films, which will be shipped by the sponsor.