The turtles are back and they are ready for more pizza and crime fighting! On June 2nd we will be celebrating the upcoming release of Teenage Mutant Ninja Turtles 2 – Out of the Shadows with a fun Twitter party. During this sponsored hour we will be chatting about Michelangelo, Donatello, Leonardo, and Raphael and their return to the big screen while giving away some AWESOME prizes to participants. Join me and the Bloggin’ Mamas crew as we host the #TMNT2 Teenage Mutant Ninja Turtles 2 Twitter party on Thursday, 6/2/16 at 9pm EST! 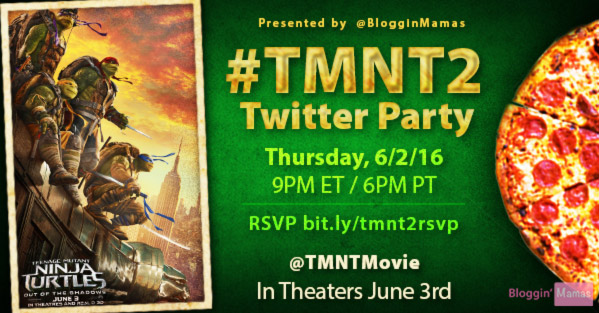 About Teenage Mutant Ninja Turtles : Out of the Shadows

Michelangelo, Donatello, Leonardo, and Raphael return to theaters this summer to battle bigger, badder villains, alongside April O’Neil (Megan Fox), Vern Fenwick (Will Arnett), and a newcomer: the hockey-masked vigilante Casey Jones (Stephen Amell). After supervillain Shredder (Brian Tee) escapes custody, he joins forces with mad scientist Baxter Stockman (Tyler Perry) and two dimwitted henchmen, Bebop (Gary Anthony Williams) and Rocksteady (WWE Superstar Stephen “Sheamus” Farrelly), to unleash a diabolical plan to take over the world. As the Turtles prepare to take on Shredder and his new crew, they find themselves facing an even greater evil with similar intentions: the notorious Krang.

About the Teenage Mutant Ninja Turtles 2: Out of the Shadows Toys

To celebrate the release of the new film, Teenage Mutant Ninja Turtles 2: Out of the Shadows, Playmates and Mega Bloks have created an amazing line of movie toys for Turtles’ fans of all ages! You can collect all your favorite Turtles and new characters like Casey Jones, Bebop and Rocksteady, plus recreate your favorite scenes from the film using the new Battle Truck and Lair. Whether you want action figures, role-play sets, vehicles, or construction sets, Playmates and Mega Bloks have you covered when it comes to the new movie. You can find the new movie toys at your favorite retail and online stores now.

Dur­ing the Twit­ter Party there will be a chance to win one of the fol­low­ing prizes by answer­ing var­i­ous ques­tions about the Teenage Mutant Ninja Turtles. Win­ners will be selected at ran­dom from all eli­gi­ble entries.

While you wait for the party to get started, get caught up with the Turtles original movie on (affiliate links) Amazon and see all the cool new toys for Out of the Shadows.

Rules: Everyone can join the #TMNT2 twitter chat, but only U. S. residents age 18 and over are eligible to enter to win prizes. For complete rules of the Teenage Mutant Ninja Turtles 2 Twitter Party please visit: http://bit.ly/tmnt2rsvp

Disclosure: This is part of a sponsored collaboration with Bloggin’ Mamas. However, all opinions expressed are my own, including thoughts in tweets. I am receiving compensation as a co-host for the Teenage Mutant Ninja Turtles 2 Twitter Party. The sponsor will be responsible for prize fulfillment. This giveaway is in no way associated with, sponsored, administered, or endorsed by Facebook, Twitter, Google, Pinterest or any other social media network. The disclosure is done in accordance with the Federal Trade Commission 10 CFR, Part 255 Guides Concerning the use of Endorsements and Testimonials in Advertising.