Let’s talk BUBBLES! I am super excited to kickoff the New Year with a fun and entertaining twitter party featuring Talking Tom’s Bubble Shooter app. During this sponsored hour we will be celebrating the release of Bubble Shooter and giving away some AWESOME prizes, think iPad Air!!!! Join me and Talking Tom on 1/7/16 at 9pm EST for a chat using #TomsBubbles. 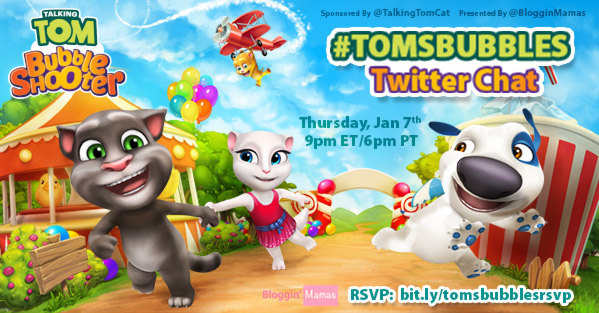 With 3 billion downloads to its name, Talking Tom is sure to have many more with this NEW game! Talking Tom Bubble Shooter is a super addictive and highly-anticipated bubble shooter game. 180 levels packed with theme park adventures. Collect stickers, win special powers and play as your favorite character in single player or multiplayer mode. Best of all, it’s free at TomBubbleShooter.com.

Dur­ing the Twit­ter Party there will be a chance to win one of the fol­low­ing prizes by answer­ing var­i­ous ques­tions about Talking Tom. Win­ners will be selected at ran­dom from all eli­gi­ble entries.

Rules: Everyone can join the Talking Tom Bubble Shooter twitter chat, but only U. S. residents age 18 and over are eligible to enter to win prizes. For complete rules please visit: bit.ly/tomsbubblesrsvp

Disclosure: This is part of a sponsored collaboration with Bloggin’ Mamas. However, all opinions expressed are my own, including thoughts in tweets. I am receiving compensation as a co-host for the Talking Tom Bubbles Shooter Twitter Party. The sponsor will be responsible for prize fulfillment. This giveaway is in no way associated with, sponsored, administered, or endorsed by Facebook, Twitter, Google, Pinterest or any other social media network. The disclosure is done in accordance with the Federal Trade Commission 10 CFR, Part 255 Guides Concerning the use of Endorsements and Testimonials in Advertising.