welcomes you to the 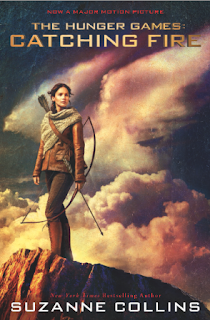 THE HUNGER GAMES: CATCHING FIRE will be in theaters in less than two weeks!
A few years ago The Hunger Games was one of the books on J’s summer reading list. I begged and pleaded for him to read to no end. Finally one of his older friends mentioned the book and told him how good it was. Not only did he read it in a matter of days, but he re-read it! Then he went on to nag me for the sequels to it. He thoroughly enjoyed the series and ran to see the movie as soon as it came out. Read on to learn more about the movie and to win a copy of your very own.

SYNOPSIS:
THE HUNGER GAMES: CATCHING FIRE begins as Katniss Everdeen has returned home safe after winning the 74th Annual Hunger Games along with fellow tribute Peeta Mellark.  Winning means that they must turn around and leave their family and close friends, embarking on a “Victor’s Tour” of the districts.  Along the way Katniss senses that a rebellion is simmering, but the Capitol is still very much in control as President Snow prepares the 75th Annual Hunger Games (The Quarter Quell) – a competition that could change Panem forever.

THE HUNGER GAMES: CATCHING FIRE will be directed by Francis Lawrence, and produced by Nina Jacobson’s Color Force in tandem with producer Jon Kilik. The novel on which the film is based is the second in a trilogy that has over 50 million copies in print in the U.S. alone.

Katniss and Primrose have the ultimate sisterly bond: “I need only to think of Prim and all my resolve disintegrates. It’s my job to protect her.” Their bond is so strong that it is an integral part of THE HUNGER GAMES and CATCHING FIRE. Their sisterly love drives Katniss forward in the games and compels her to want to win and return home. In Katniss & Primrose – Family First.

Lionsgate will release THE HUNGER GAMES: CATCHING FIRE on November 22, 2013.

One person will be randomly selected to receive a Hunger Games DVD Prize Pack as described above. The Hunger Games DVD Prize Pack Giveaway will run from Nov 12th to Nov 22nd. All entrants must be at least 18 years of age or older. This giveaway is open to residents of the United States! No purchase is necessary to enter. Void where prohibited by law. The odds of winning are based on the number of entries received. All entries are optional; however, the more tasks you complete the greater your chances of winning. Confirmed Winner(s) will be contacted by email. You must use the Giveaway Tools Widget below to enter. Good Luck!

Entry-Form
Disclosure: Mama’s Mission was not compensated for this post, and is not responsible for the prize fulfillment. The sponsor of this event will be responsible for fulfillment of prize. Please allow 4-6 weeks for the delivery of the prize. This event is in no way associated with, sponsored, administered, or endorsed by Facebook, Twitter, Google, Pinterest or any other social media network. The disclosure is done in accordance with the Federal Trade Commission 10 CFR, Part 255 Guides Concerning the use of Endorsements and Testimonials in Advertising.