Love Cirque du Soleil? Love Michael Jackson? Then you won’t want to miss the Michael Jackson THE IMMORTAL World Tour when it comes to South Florida at the BB&T Center for two days only, May 23 & 24, 2014!

The Michael Jackson THE IMMORTAL World Tour by Cirque du Soleil first premiered in Montreal in October of 2011. Since that time, it has been seen all over North America, Europe, Asia, Australia, New Zealand and the Middle East, and has become among the top 10 grossing music tours ever.

Directed by Jamie King, this electrifying production has thrilled audiences again and again with the combination choreography from Cirque du Soleil and the musical talents of Michael Jackson. Picture it: 40 international dances, musicians, and acrobats all coming together to bring you a show like no other, just how the King of Pop always used to do it.

This show is for long time Michael Jackson lovers as well as new ones! The music will move you in ways you never thought possible as you watch it in motion through the movements of the performances. Be ready to dance in your seats to the sounds of the beats.

Starting at just $50, tickets can be purchased by phone 1-800-745-8000 or directly online at the Cirque du Soleil website. The fan reviews online have been outstanding with an overwhelming number of people giving the show a 5/5 stars!

If you’ve had the chance to see it, let us know what you thought! 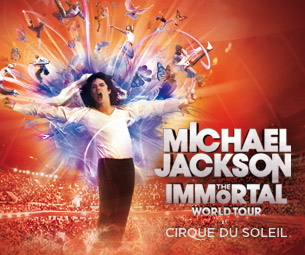